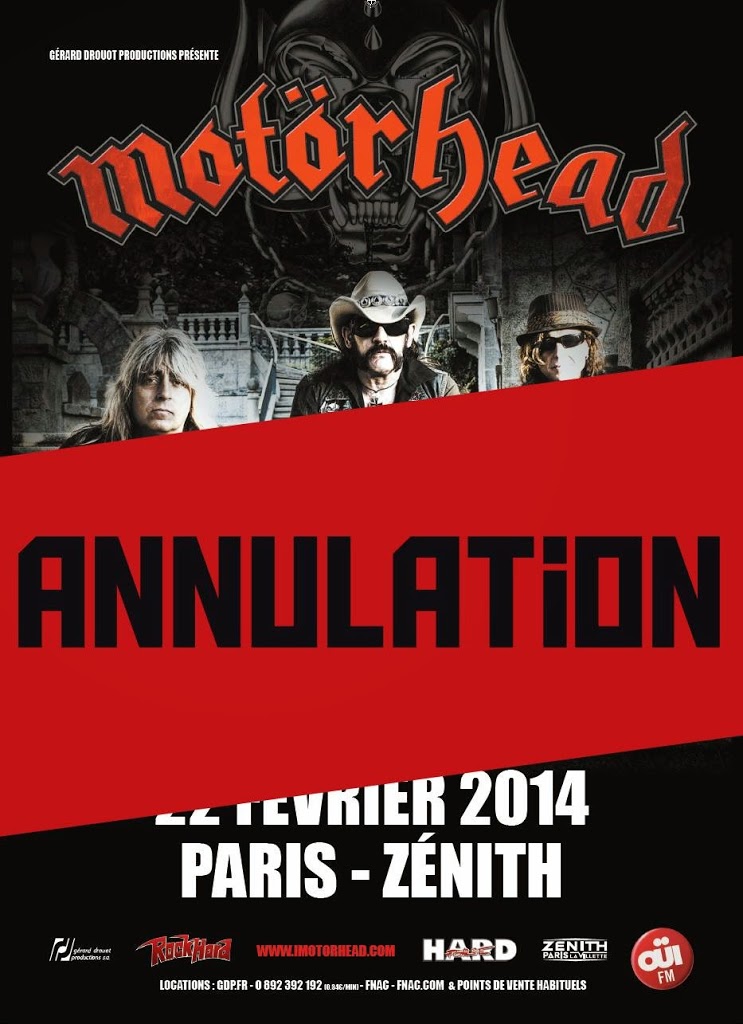 January 24, 2014 – It is with great regret that Motörhead has to announce the cancellation of their European tour, scheduled to start February, 2014.

Many concerted, diligent and focused efforts were made by founding member, and international icon, Lemmy Kilmister to deal with a range of health issues relating to diabetes. While there has been undoubted progress, Lemmy and the band were advised by doctors that it was still too soon to resume full touring activities, and so for the good of the future, the band and Lemmy reluctantly agreed to cancel.

No-one is hurting more over this than Lemmy, and he feels the aggravation and inconvenience of every ticket, and every method of transportation, already paid for by loyal fans in anticipation of the tour. Being a road warrior of over 50 dedicated, non-stop years, it is equally distressing for him to be unable to occupy the top lounge of the trusty tour bus (his spiritual home) but Lemmy recognizes that his long-term health must win. It goes without saying that Lemmy profusely apologizes for inconveniences caused, but he does want everyone to know that he is continuing on the road to a full recovery, and that the prognosis long-term is very good.

Fans have shown tremendous support for Lemmy, and it has meant so much to him. As he told Rolling Stone, « Oh, man, the fans were unbelievable when I got sick, » he says. « No bitching. It was all ‘Take your time, get better. Don’t worry, we’ll wait for you. Get well.' »

Rome was not built in a day…like Lemmy’s health. But there is some strong light at the end of the tunnel here…we thank you so very much for your continued love, support and understanding.