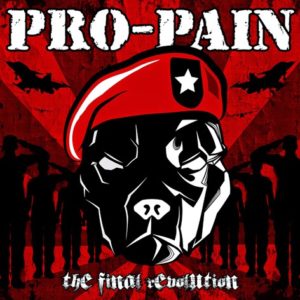 PRO-PAIN put together an informative video with regard to the making of the new album « The Final Revolution ». It was filmed by Kirk Farrington, who is also the director of the upcoming video for the song « Deathwish ».

PRO-PAIN are set to release their new studio album The Final Revolution on November 25th, 2013 (Germany: November 22nd, 2013; US/Canada: January 21st, 2013).
Tracklisting:
1.Deathwish
2.One Shot One Kill
3.Southbound
4.Problem Reaction Solution
5.The Final Revolution
6.Can’t Stop The Pain
7.All Systems Fail
8.Want Some?
9.Fall From Grace
10.Emerge
11.Mass Extinction
12.Under The Gun
13.Life’s Hard – Live 2010 (bonus track digi)
14.Get Real – Live 2010 (bonus track digi)
15.Party In Paris – UK Subs cover (bonus track digi)
The Final Revolution was recorded, mixed, and mastered by V.O. Pulver (Gurd) at Little Creek Studio in Gelterkinden, Switzerland from August 18th to August 29th, 2013.
The standard release will feature twelve brand-new tracks. There will be other configurations available as well, in the form of a Digipak and a Gatefold Album. The Digipak will contain bonus material (including live tracks plus a UK Subs cover) and a foldout poster.

BETZEFER « The Devil Went Down To The Holy Land »