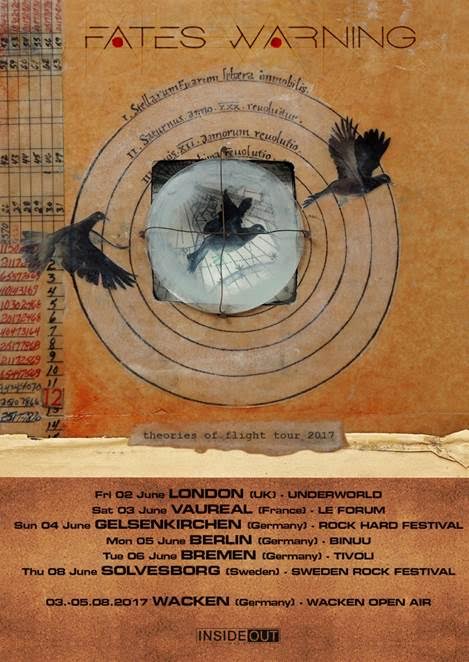 U.S. Progressive Metal pioneers FATES WARNING have just wrapped up an extremely successful first European headlining tour for their much praised latest release “Theories Of Flight” and are now announcing a next run of dates for June, including the first UK and French shows in support of the album.

FATES WARNING vocalist Ray Alder checked in with the following comment:
“I want to thank all our fans for making this last European tour one of our most successful tours we have ever had. We are so very proud of « Theories » and the reaction from all of you, the fans, was more than we could have ever hoped for. To have everyone singing along to a new song is something special. Thank you all. We can’t wait to go back on the road again. We look forward to playing some places we have never been as well as some places we have not been to in a long time…
Thank you all again, you made this tour very special.”

Here is a list of upcoming dates for FATES WARNING announced so far (New additions marked *):

Next to the standard CD and Digital Download, “Theories Of Flight” is also available as limited edition Mediabook 2CD (with 6 acoustic bonus tracks) and as Gatefold 2LP (with full standard album on CD and the 6 acoustic tracks as bonus on Side D!).

All physical album formats are available from the IOM webshop here:
http://smarturl.it/theoriesINOstore